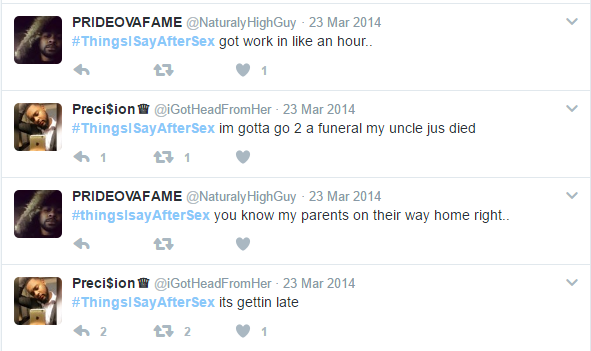 Social media is a part of our lives and no one can deny this fact. But the best part is new trends every day. Twitter is the best with this. #ThingsISayAfterSex is the new trend which is popular on Twitter today! And nobody knows the reason. Here are some of the best tweets on trend #ThingsISayAfterSex:

One of the best tweets

“I wonder what dumb hashtags are trending today.” #ThingsISayAfterSex

Um, who said we were done?#ThingsISayAfterSex

“I’m gonna leave now, is that okay or are you gonna feel used?” #ThingsISayAfterSex

“Don’t try to cuddle me.” #ThingsISayAfterSex

Hahaha RT @Astrologysex: #thingsIsayaftersex – #Virgo – you were the best I’ve ever had… but i’m expecting a guest.

So I guess, I should go

I don’t want you to think I’m not listening ,but I witness a murder before I got here so…#thingsisayaftersex

No boy you ain’t that good

Basically, you are getting the things to say after hooking up

Basically, you should get out

#thingsIsayAfterSex you know my parents on their way home right..