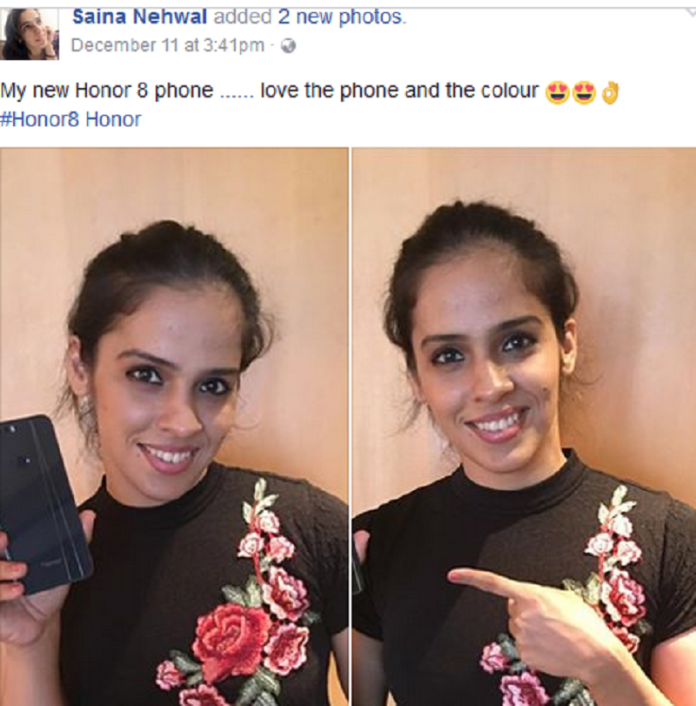 Enough of people pointing fingers on other. We live in a society where pointing out finger at others is important but looking into their own lives is not. Especially, if the other person is celebrity and is popular. Many people have become a victim of this problem. But do you know who is the latest one? Our star badminton player, Saina Nehwal.

Saina Nehwal posted 2 pictures of her flaunting her new phone. And her new phone is a product of Chinese company ‘Honor’.And just because of this picture, these super smart and extremely intelligent people called her “ANTI-NATIONALIST”. Seriously guys? Calling our national player anti-nationalist just because of a picture?

Saina Nehwal is the player who changed the face of India badminton. She is the one who has brought our country so much honour. People might have forgot about Saina winning medals for the country. Posting pictures with medals make her a true Indian. But posting a picture with a phone makes her an Anti-Nationalist.

WOW. What a logic!

And do you know, what is more astonishing here? Nowadays, people feel offended over literally no reason.  The reason behind calling her an anti-nationalist is completely stupid and lame. And it is the dumbest reason. And they are probably the same people who also uses Chinese products but points out when someone else does it.

Let’s check out the comments of these super smart and intelligent people who called Saina, an anti-nationalist:

Seriously dude? Which phone are you using?

And here is a Modi supporter. Someone please tell him that Modi Ji has recently signed many big deals with China at BRICS meet 2016.

What did you just say?

Okay! This is too much.

And people like them would hide under the table once someone will ask them to come out and prove themselves.

Do you even know what you’re writing?

Despite, all the haters, her fans supported her and brought down the hypocrisy: