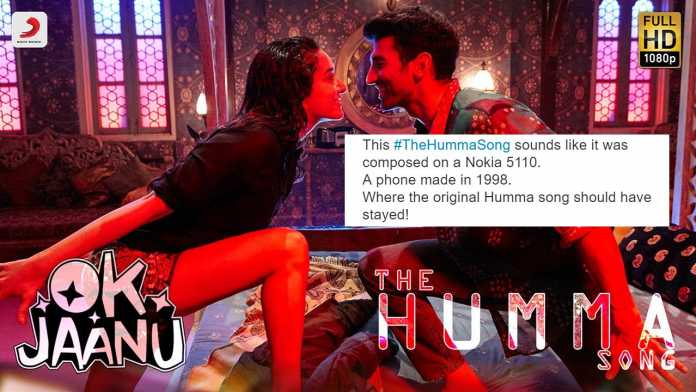 Not every recreation is good. And Badshah has given us the major reason to day this. Some re-makes are good and other’s just fail in an epic way. So, same is happening with Badshah when he tried to recreate the magic of 90s classic. We are talking about, A.R. Rahman’s song, Humma Humma. Badshah has recreated the Humma Song for Ok Jaanu movie starring Shraddha Kapoor and Aditya Roy Kapoor. And it seems like people ain’t as happy as he’s thinking they are.

But little did he know that the song is no up to the mark. And they are blaming him for ruining an utter classic. Let’s check out what people have to say about The Humma Song:

We couldn’t have said it better.

Thanks Bollywood for ruining one more 90s song by adding pointless sleaze-rap to it.https://t.co/TdZH45tOFS

I swear! Where the hell did they do recording of the song?

This #TheHummaSong sounds like it was composed on a Nokia 5110.
A phone made in 1998.
Where the original Humma song should have stayed!

Well, we can understand with this ‘NO’

Badshah puts the NO in Nostalgia. #thehummasong

The remix of #HummaHumma has tormented me so badly that I’ve been playing the original one on loop now.

Please! *crying in the corner*

Please stop killing the memories of my youth. I miss Remo & Sonali Bhendre so much. #HummaHumma

.@arrahman collaborating with artists like @Its_Badshah for killing a fabulous original #HummaHumma is what makes me lose faith in humanity!

They should seriously answer -_-

He said what I wanted to say.

Dear Bollywood, Thank you for ruining one more cult song from 90’s. That rap in #HummaHumma sounds like crap.

Badshah is the new Himesh Reshammiya -_-